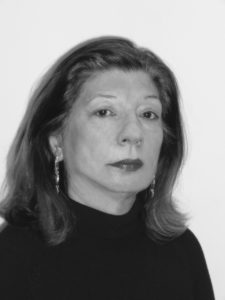 Helene Paraskeva was born in Athens and studied in Greece, Uk and Italy. She has been living in Rome for many years now. She has taught English language and literature in State High schools and has carried out multicultural projects cooperating with NGO’s, Local Councils and Universities. She has worked for the Observatory on Migrations Report (IDOS, by Caritas Migrantes, 2009, 2010 and 2011). She has published the poetic trilogy Meltèmi (LietoColle, 2009), Empresses Fireflies(LietoColle, 2012) and The Smell of the Aegean Jasmin(La Vita Felice, 2014). Her short stories have been published in various magazines and reviews as well as a number of Anthlogies, among which San Nicolas, the Peremptory Moor (La Meridiana, 2006), Alcestis (The cart of Pickipò, Ediesse, 2006) Migrations and Urban Landscapes (CACIT, 2008) Lingua Madre2000 (SEB2008), The Glance of the Other (Mangrovie, 2008) Swallows and Patrols (Mangrovie2009). Among her individual publications, The Tragediometre and Other Stories (collection of short stories, Faraeditore, 2003) City of Emperors (short stories, Faraeditore, 2005) Within the Cosmic Egg (a thriller, novel, Faraeditore, 2006, shortlisted for Grazia Deledda Prize 2007). Helene Paraskeva has cooperated with the weekly Italian magazine Internazionale. She is member of the Company of Poets (www.compagniadellepoete.com).